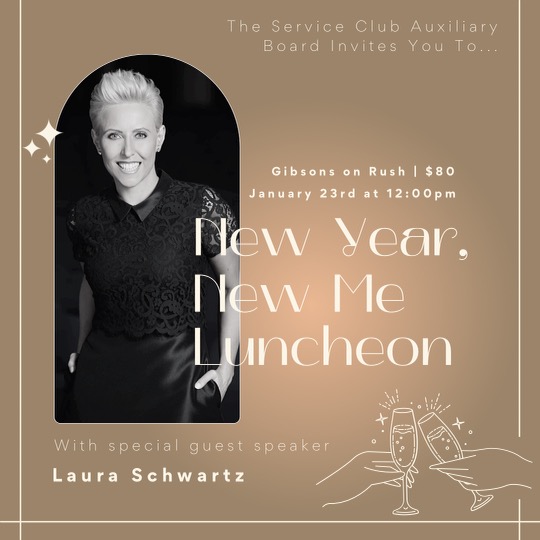 Hosted by the Service Club Auxiliary Board, this year’s New Year, New Me Luncheon promises to be exciting and inspiring! A great way to kick off the year, and celebrate with friends.

Special guest speaker is Laura Schwartz, an American professional speaker, author and television commentator. She served as an on-air contributor for the Fox News Channel from 2004 to 2007 and as a special correspondent for CNN’s Larry King Live during the presidential primaries from the fall of 2007 to the summer of 2008. She covered the 2008 presidential election for the CBS Early Show and gives frequent commentary on the BBC and Sir David Frost’s Frost Over The World.

Laura is a dynamo – encouraging everyone she meets to empower themselves by using their inner strengths and positivity. Learn more about Laura on her website: https://lauraschwartzlive.com/

Get your tickets today!

IN COMPLIANCE WITH CITY OF CHICAGO REGULATIONS, PROOF OF VACCINATION WILL NEED TO BE PRESENTED UPON ARRIVAL.

MAKE YOUR ENTREE CHOICE BY ORDERING THE APPROPRIATE TICKET

The Service Club of Chicago is a charitable organization of women which has continually served the charitable needs of Chicago and its surrounding communities since 1890.

Learn more about us